Hard Drive: The Cornerstone of your Computer

While there have been numerous innovations, hard drives belong to that subset of innovations. Today’s time demand individuals and organisations to quickly get accustomed to changes and act accordingly; hence, the ability to analyse and implement prompt action on data is essential. It is also equally important to store that data, and that’s where the significance of hard drive comes into play.
Hard drives are just another element of computers, and when coupled with processors and computer peripherals, it can do wonders. 1965, IBM developed the very first hard drive for accounting purpose, and in the modern era of personal computer and servers, the hard drive can be found in almost every electronic gadget that you have ever held, from digital cameras to smartphones, from set-top boxes to camcorders. To access any data on your system, you need to have a hard drive.

How Does Hard Drive Function?

The hard drives use magnetic storage to store all information & data.  To retrieve data on the platters the magnetic heads mounts on a moving actuator arm. The data stored is in the form of fragments, and not as a single chunk on the HDD platters. Hard drives use magnetism to store data; the platters have a coating of aluminium and copper that can be magnetised and demagnetised.

They don’t come with an expiry date, but they have a lifespan also. Anything can go wrong, and you may not even have the slightest of the idea that your hard drive is likely to fail in the next operation.
Hard drive failures occur when the hard drive malfunctions and you cannot access the data/information stored in it. If you experience hard drive ‘crash’ or ‘failure’ problem, then you may lose your valuable data and might require external assistance to recover it.

What is Hard Drive Failure?

As hard drive is a mechanical device, it is likely to fail with time. Hard drives can fail either due to mechanical failures or through misuse. Let’s look at some of the some of the reasons as to why hard disk fails. 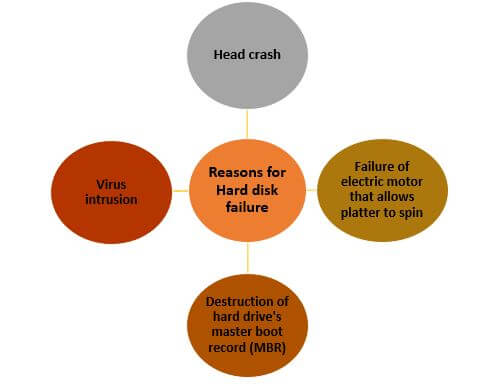 Some other reasons are improper ventilation, improper maintenance, inappropriate ejection or insertion operations, extreme heating, and faulty CPU fan and so on.

What are the Types of Hard Drive Failures?

There are two types of hard drive failure:

There are symptoms of hard disk failure, and the quicker you respond to the signs. Before proceeding further, you need to understand where the real problem lies. Has your hard drive crashed? Dead?  Damaged? Or formatted? These are different scenarios which are likely to cause hard drive failure.

Several third-party applications address the issues of hard drive failures, many of which are freely available in the marketplace. There is no guarantee that these free tool/software can recover your data, it can further aggravate the situation.  When you don’t know where you’re heading towards with these available applications, you may end up losing the data.

The best precautionary measure is to have an updated backup of your critical data as you never know what might get wrong and in such times, at least you can recover your data efficiently. Try to refrain from repairing the hard drive on your own as all your efforts may not work out.
To prevent further damage, seek the assistance of a reliable hard drive recovery services provider. Instead of implementing the head-in-the-sand approach, approaching a specialised data recovery service provider is far more feasible.