What Are Solar Storms? 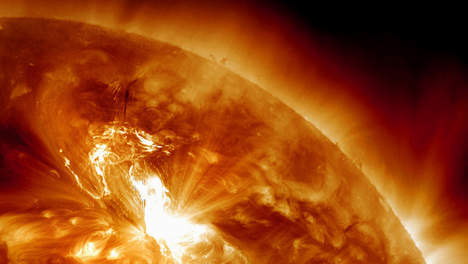 Solar storms are extreme weather conditions on Sun and which results in a release of a huge burst of energy and send energy, light and high-speed plasma particles in space.
In a major eruption, the sun shoots a beam of heat and light (solar flare), a huge ball of plasma (coronal mass ejections, CMEs) and sub-atomic particles that can reach 80% of the speed of light (solar energetic particles) in space.
The effects of a solar storm (on computers) are not predicted in advance. The institutions such as NASA or the Space Weather Prediction Centre of the National Oceanic and Atmospheric Administration who study the Sun may indicate the possibility of solar flares. It is believed that solar flare intensifies after every 11 years and the recent one being in the year 2013.

In the past, solar storms several times ‘hit‘ the Earth. Here is an overview of the most famous events in a row:

A solar storm was identified as the cause of large-scale communication problems on November 17, 1882.
The New York Times reported that the telegraph wires were useless for several hours, which resulted in “a lot of annoyance because of the delay in the transmission of commercial messages.” Phones were also affected; people reported: ” buzzing, ringing like sound instead of normal communication.”

The Astronauts on the Space Shuttle Atlantis had a close brush in 1989, while aboard the shuttle a large X-class flare was shot in space. Although the astronauts were within a safe boundary, they reported “burning eyes”, a reaction of their retinas to the solar particles”.
The crew was asked to move to a  remotest & shielded location of the shuttle to take shelter, even with their eyes closed, the astronauts reported seeing flashes of light.

In March 1989 a solar storm caused a nine-hour power outage that affected more than 6 million people in Quebec, Canada.
The communication networks seemed compromised, and it was a speculation that the Kremlin is behind all this. NASA reported anomalies in the behaviour of the satellites; the solar storm sent the satellites out of control for several hours.
The event recorded by engineers and scientists; it possibly showed the venerability of our communication systems. It also caused scientists to do study Solar Storms and also to prepare us for the next storm in case it arrives!

In August 1989, the Toronto Stock Exchange in Canada ceased to trade after solar activity hit a series of hard drives from the computer system. The trade halted for over 3 hours. “I do not know what the gods did to us,” said the vice president of the Fair John Kane.

Earth narrowly escaped what scientist believe was the strongest Solar storm to hit Earth in last 150 years.Had it hit Earth, the result would have been cataclysmic; the storm could damage the vital communication networks, GPS networks and electrical grids causing widespread blackouts. The solar storms could have caused a damage of 2 trillion dollars worldwide. It would have taken us 10 years to rebuild or repair the vital systems. Stellar Data Recovery had mentioned about the Solar Storms to the magazines Bild and Hamburger Abendblatt.

In the year 2014, the scientist warned about the explosions on the Sun’s surface, which could have caused moderate to strong geomagnetic storm on Earth. This storm was classified as unusual and did not create mayhem but did cause the spectacular displays on Northern Lights across the US.
The US National Weather Service warned the electricity network companies and the Federal Emergency Management Agency. The strength of this solar storm, however, was less in comparison with the largest geomagnetic storms from the past such as the Carrington storm in 1859.

Are Solar Storms A Big Threat?

According to a study by the US National Academy of Sciences, a storm similar to that of 2012 can cause more than 2 trillion (= 1000 billion) dollars in damage. NASA says that 20 times greater than the cost of Hurricane Katrina inflicted on New Orleans in 2005.
In a report published by space weather in 2104, Pete Riley the physicist of Predictive Science calculated the probability of ‘Carrington‘ like storm occurring in future to 12%.

If a massive solar storm occurs in near future, the electricity network surges occur which can put running data on a hard drive at risk. Firstly, there is the risk that comes with the abrupt stop of the platters which can lead to ‘head crash’. This occurs when the read heads come into contact with the still rotating disks. This could damage both the head and the disk. The risk of an unexpected power failure may corrupt the file system or individual files. This damage can also cause data loss.

Note we are talking about the risk associated with Solar Storms.There is likely possibility of the hard drive being intact despite the sudden power outage.

Did you suffer from data loss due to a power outage? Connect with one of our advisors to get your data back: 020 3034 0201 or info@stellardatarecovery.co.uk